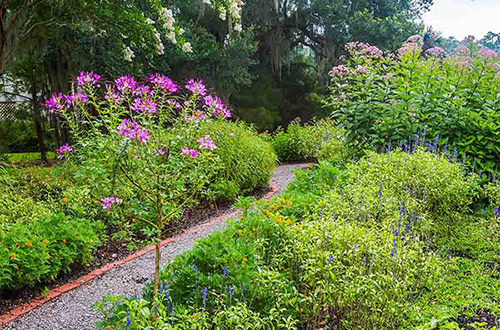 Resourcefulness and imagination, backed with energy and ingenuity, bring The Callawassie Island Garden Club to bloom in every season. Perhaps their special genius, though, is in discovering – and inventing – activities and endeavors that embrace not only the Garden Club members themselves, but all of Callawassie Island, and our neighboring communities. This club is involved.

Garden Club president Wendy Hilty says this makes for a good match with the people who are moving to Callawassie Island. “People who come to the Island are so active and outgoing.  They’re into everything,” she said.

Heart of the Home – Pulse of the Community

An example of the Garden Club’s resourcefulness is the book of residents’ recipes they prepared. Well, two examples in fact. The Garden Club’s Nothing Could Be Finer – A Collection of Callawassie Island Recipes was compiled and published twice over the last several years. The subtitle to the sequel book was Thyme after Time.  Clearly, the Club is not taking itself too seriously, despite the professional level of their achievements.

Lighthearted though the tone might be, the underpinnings of choosing community recipes as a fundraiser were profound in several ways. If you asked people, “What is the heart of the home?” chances are that many would say, “the kitchen.” The family’s nourishment originates there, in a literal sense. And figuratively, too, the kitchen is where family and friends gather for the everyday exchanges that bind together families, neighborhoods and communities. Someone once said, “Food is love.” That’s why a book of Callawassie Island recipes – or two – was such a fitting idea for the Garden Club. A gift from the homes; a gift from the heart.  No wonder both editions sold out long ago.

A Whole Bag of Tools

The sought-after recipe books are just one example of the many, many ways the Garden Club has thought of to raise funds for good causes. In fact, charitable giving is just one of the activities on the Garden Club’s agenda. Former Garden Club president Liz Penke said, “Philanthropic projects are just one part of what we do.” The first thing the Garden Club provides, to new members especially, is the know-how to become a happy gardener.  Even more often, new residents get the new learning they need about the trees and shrubs and flowers that are characteristic of our subtropical climate and our coastal, tidal rhythms. “Even experienced gardeners come to Callawassie Island and find so much that is new. Our plants, our soil, our weather.”  Not much, if anything, prepares you for this richness, she said.

For a Season of Giving

Of particular charitable interest, in this season, is the Festival of Trees in Historic Beaufort nearby. The Festival benefits from a specially-decorated Holiday tree, donated by the Garden Club. Just across the bridge from Beaufort, the Port Royal Sound Foundation Maritime Center also gets a Garden Club tree, decorated by Club members in harmony with the Maritime Centers mission of nourishing and protecting our matchless Lowcountry coastline, inlets and harbors, and the tidal rivers that course through them.

Good works rely on good contributions, as well as good intentions, so the Garden Club again proves its resourcefulness and energy. Every other year, the bi-annual Garden Club Silent Auction converts donated items and services to cash, an event that is as fun as it is worthwhile. People look forward to it with pleasure. The most recent Silent Auction was such a success, that with the proceeds the Garden Club will landscape the new River Club. For the River Club to get its “exterior decoration” at no charge to residents exemplifies the sense of service that cheerfully infuses the Garden Club. 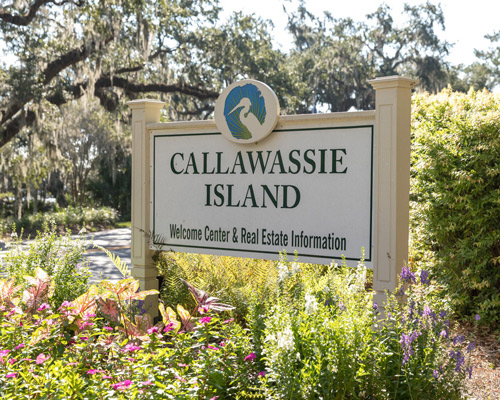 Stewards of The Beauty That’s All Around Us

Other Island beautification projects fulfilled by the Garden Club include the impressive and luxurious hanging baskets that festoon the outside of the Clubhouse and Pro Shop. Our Tennis Club received new flower beds and shrubs through the efforts of the Garden Club, too.

The entrance to Callawassie Island was re-imagined and re-planted by the Garden Club just a year ago, and our Welcome Center got the Garden Club treatment, including window boxes that explode with color.

In the Hands of the Very Young

The second-grade classes at Okatie Elementary School gain knowledge and first-hand experience in the fulfilling life of nurturing things that grow, thanks to “Monet’s Garden,” a project born and sustained through Garden Club efforts. The school was found to have the makings of a thriving, attractive garden behind it, but the ground had not been maintained for a while, when the Callawassie Island Garden Club stepped forward to offer their services. Now, each second-grade class at Okatie Elementary gets regular, hands-on (or should we say “hands in”) instruction and experience, preparing and maintaining the school’s garden. Their aiming point each year is the Teachers’ Tea that they host in the garden they’ve grown, with guidance from Garden Club members. So many dimensions of good in one project, the concept is as beautiful to contemplate as the garden itself.

And, As Always, the Staff is an Integral Part

The Callawassie Island Garden Club has a couple of patron saints in certified agronomist Billy Bagwell, and Master Gardener Ann Sauers. Whether as speakers, advisors, or the experts we rely on for an encouraging suggestion, it would be hard to imagine better friends of the Club. Billy knows about our centuries-old, moss-draped oaks as if they were ancient ancestors miraculously alive among us. Ann is known for appearing tidy and presentable no matter how deep in the soil she’s been working, nor how long. Both treat Callawassie Island as their own.

And, for the Garden Club, that makes it unanimous.