“The oldest club on the island, next to Men’s Golf,” according to sitting Club President Margaret Mary Gestaut, has reached its 30th year of gathering, grace, and goodwill. With its tender heart toward its sorority of members and all those they serve – young and old, near and far, on and off the island – the Women’s Club might also be the most endearing of all the Callawassie Clubs.

Founded as an opportunity for wives to meet while their husbands were golfing, the Callawassie Island Women’s Club (CIWC) originally began as a group called the Marsh Hens. At the time, these women were new to the area, living in a small community, and looking for ways to meet others. They would meet to learn more about life on Callawassie, how to get involved and make a difference, and to simply have some fun along the way. “They started small with a Bridge Club,” Gestaut explains, “then established links with the community, starting with the fire station near the island’s entrance, providing dinner for them. Then they began tutoring off-island, and who we were as a club just grew from there.”

In a brief introduction of the club’s form and function, Membership Chairman Lynn Roby says, “We meet monthly from September to May, except for January. We start with a social time, then have a program that could be teaching us something or entertainment, and then of course, food!” Second only to the servant hearts you find in the Women’s Club, breaking bread among dear friends is part of every gathering. When it comes to events, the women keep it simple: a gathering in September, Craft Show in November, and a Style Show in May where ladies (or gents as it was pointed out) do the modeling. Of those involved in each of these events and more, Roby acknowledges, “We have an amazing amount of talented people here.”

While these events aren’t designed specifically to be fundraisers, there is enough of an overflow through unused annual dues that proceeds can be directed to local charities. The club’s dues cover costs for things like guest speakers, event set up, decoration, etc., and production costs are intentionally kept low to create a greater giving potential through the club’s donations to others. In addition to funding a scholarship for a kids’ camp, the Women’s Club has served worthy causes like Heroes on Horseback, Bluffton Self Help’s Wellness Food Pantry, and even the Callawassie employees’ fund for staff emergencies.

Most of the participation-based activities throughout the year revolve around volunteering, outreach, or educational outings, like a recent trip to Parris Island coupled with an archaeological dig. All these years later, the club still tutors students and serves meals to the very same firehouse. Now, they also garden for others and continue to add new service ideas and projects to further enrich or care for the lives of those both involved and impacted.

It could be said that the once-upon-a-time “Marsh Hens” are still mother hens to the entire island and surrounding area. One of the goals of the Women’s Club – in addition to the social and educational interests of members – is also to foster community relations. As part of this, the club maintains a list of outside organizations, so you know who to contact, where to volunteer, and how. The friendships, information, and opportunities within the club enhance women’s abilities to become and remain an active, contributing, and influential presence in the community.

Roby encourages, “You can be as involved or not as you want. If you just want to come to the meetings, you can do just that. But there are a lot of different ways to get involved in volunteering and outreach that can be made very specific to each person.”

In this spirit, the CIWC has spawned multiple club offshoots such as forming new clubs like the Garden Club or organized efforts like Wee Chicks & Lame Ducks. Gestaut explains this unique and caring concept of Wee Chicks & Lame Ducks describing, “When you have kids or nieces and nephews visiting, and you maybe don’t have the kid stuff you need – like baby items or kid’s toys – there’s a list of neighbors who might have those things to lend to you.” Perhaps even more endearing is the relief of having what you need when you are sick, injured, recuperating, or just in need of help getting around.

Extending this idea to all types of needs, they created Helping Hands, which lends exactly that in whatever way needed – including a meal train where every street has a captain, and the neighborhood provides meals for those going through trying circumstances. As Roby words it, “We take care of our neighbors. If they need things picked up or need groceries, we always want to make sure our neighbors know we’re here.” 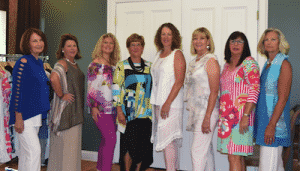 Whether that refers to neighbors on the island or neighbors county-wide, this community does indeed know the women of the Callawassie Island Women’s Club are and that they’re all better for it. The biggest reason this works as well as it does is also the same thing both Roby and Gestaut agree is the best part of the club: the women themselves. Roby recalls being new to the area and to the club, saying, “I went with a friend, but by the time I was seated at a table, I just felt good. I had already made connections, and everyone was so welcoming.”

That was Gestaut’s experience when she first found the CIWC, too. “The first time I came, my sister-in-law lived on-island, and club members had been asked to bring new person. So, she invited me to the reception. The Board made the food back then. It all took place outside. It was beautiful. It was a nice introduction, and I joined the club.” That introduction became today’s current club President, as a great example of the possibilities when you invite that person you’ve been meaning to bring along. As Roby reminds, “Everyone’s invited.”

Start It and They Will Join

In addition to being invited to attend, women are also welcome to start something new. “The Women’s Club brought me back to my roots,” Roby says, recalling yesteryear Women’s Clubs from where she hails in the North. She credits CIWC with her becoming connected and “at home” here in the Lowcountry. “It was so helpful to learn about what was available to do here, especially because we have so many different kinds of organizations and clubs for any and all interests,” Roby adds. “If you want to do something or have a resource that isn’t here at the moment, just start it. Start it, and someone will join.”

Perhaps you’re new or would simply like to become more connected, welcome, active, and involved. Perhaps you have an idea for a new way to set waves of blessing and benefit rippling throughout the island or area. Perhaps you could just use a few dear friends. Whatever your reason, you’re most welcome among the women of the Callawassie Island Women’s Club