Meet the self-proclaimed “Party Team with a Tennis Problem.” The phrase doesn’t do nearly enough justice to the athletic legitimacy of the Callawassie Tennis Association (CTA), but it does capture the group’s spirit in spades.

Going strong for 25 years, the CTA started with about 20 members and has continued to grow exponentially, now boasting over 140 active members. Director and Pro Instructor Bill Hoppe recalls the early days of recruiting and laughs admittedly, “People started joining because our parties were so good.” Though this shared enjoyment is common among the association, it doesn’t take away from the athleticism of some of the more advanced members and the expertise of the pros at the helm.

“Whether you’re ‘8-day-a-week highly competitive’ or for you, it’s all about the lunch afterward, you don’t have to be a super athlete to come out here and have a lot of fun on the courts,” or off, according to Hoppe. It’s a sentiment echoed by CTA President and VP, respectively, Rosemary Williams and Tom Blaskowski.

“We try to host one event per month for all the players to get together and socialize,” Williams says, “Opportunities to meet and greet, play some tennis, live music, rotation drills, drinks, food.” The array of events ranges from themed sets to one of the most well-attended events, Callawassie Wimbledon.  Each year the CTA hosts its own version of the famed traditional tournament. Tents and courts are assembled on the golf course, and attendees all dressed in white welcome guests to mimosas, berries and cream, scones and tea. Typically held in July to align with Wimbledon-proper, this event is a little hotter than its namesake across the pond, but having a marsh viewmakes it special. 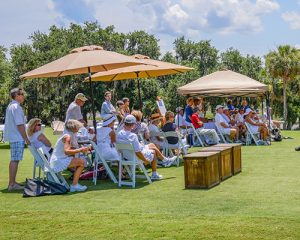 Williams’ personal favorite event is the Davis Cup. Traditionally held in October, four teams form and choose a representative country for an international celebration of food, wine, and culture, with a tennis backdrop of course. “We dress in the country’s colors. In the afternoon there’s play, spectators, socializing, and, in the end, we have a big potluck where everyone brings food from their theme country to celebrate,” says Williams.

These benchmark events are mere highlights in a program of ways to encourage people to pick up a racket. Demo Day brings in pros from outside sources who set up racks of clothing and equipment to try. TENGO is the combined tennis and golf annual tournament. Weekly and monthly socials and matches are abundant like Community Mixed events where people come out from all different levels to fill up the courts once a week, Women’s and Men’s individual and combos, Club Exchanges, and larger competitions like Pro Invitational and USTA league competitions.

Hoppe explains, “The USTA forms leagues at different levels of play and age groups and now goes year-round. Once one season ends, another begins. It used to be only spring, which is still our busiest time, and this past year we had a record number of nine teams.” Williams adds, “The neat thing about leagues is you get to see a lot of different neighborhoods or they come here and it’s a neat way to meet a lot of different groups of people. It’s very social with treats, drinks, and conversation.”

There’s a game or gathering for every level of interest and ability. All agree unanimously as Hoppe states, “If you’re scared, don’t know anything about the game, or feel intimidated, we can change that for you. That’s the great thing about Callawassie Island in general, whether you’re talking tennis or any organization. It’s a community environment where people are open-armed. If you’re new, you’re embraced by everyone welcoming you into the community and onto the court.” Of “beginners” Hoppe goes on to state, “They’re the group keeping everyone grounded in reality when we start being too hard on ourselves about the game. We see everyone having fun, laughing, even if you can barely hit the ball, and it’s a reminder of how much we enjoy it out here.” Williams concurs, “Beginner-level players are the ones that have the most fun. They’re just starting out together and don’t have an agenda or attitude, getting lessons with others at the same level so they see they’re in same company.” Blaskowski further validates, adding valuable advice, “Don’t be afraid to try. You might be surprised how good you can be even if you think you don’t have any skills built yet. We have people who have never played sports at all join tennis and start playing competitively. Don’t be afraid, and don’t wait too long either.”

Blaskowski says that speaking from personal experience. Fondly tongue-in-cheek, he describes getting sucked into tennis after being frustrated with a round of golf: “I said I’ve got to try doing something else. I looked to my right to see this beautiful facility with six courts and the ball machines available to use. I started coming in, then started to play competitively – I never had that before and I was hooked. All of this along with the luxury of having two guys with great personalities and an extreme amount of talent on how to work with people on tennis courts. We’re probably the best kept secret on the island!”

The Way It Makes You Feel

A distinct (and desirable) feature of the Callawassie Tennis Association is that the members have access to year-round pros. (To those not overly familiar with tennis, this is unusual in a sport where most pros head north to cooler climates.)

The weather is another honorary mention, allowing year-round play. Blaskowski says, “Even in summer when it’s 85 degrees in the morning, people are out playing. In winter through January and February, it’s almost ideal tennis at 9am outside.” Hoppe agrees, “It’s never so cold here you can’t play. Winter is my favorite time of year for the sport. Even when it’s 40 degrees, you come out here, the sun’s out, you get moving and it’s perfect.” 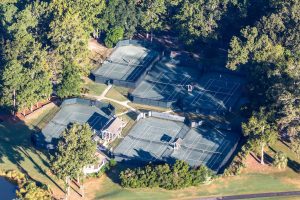 Williams credits the island’s location adding, “The natural beauty when you come across the causeway just causes your blood pressure to drop. You can stay active 10-12 months out of the year and the environment supports that. You are on an island and you feel that when you’re here. It’s pretty special.”

The CTA sets up a great serve, pitching six Har-Tru courts, two professional courts, and a beautiful facility, all included as part of the amenity package with no additional fees needed to participate. Outside groups come in twice a year to maintain the courts, and the state-of-the-art ball machines can be set “from a kid just beginning all the way up to Andre Agassi,” says Hoppe.

Perhaps the best way to get started and get your feet wet is Tennis Boot Camp which has grown every year according to organizers. Members sign up for the event as a learning tool as six pros are brought in from other area clubs, each holding their own court to work on one specific thing. Participants rotate after 30 minutes to go on to the next court to workshop another skill.

Pickle on the Side

You can’t fully cover CTA without throwing in a little Pickle(ball) on the side. Hoppe acknowledges, “The trend is not stopping. Pickleball is taking over the country. A lot of people think Pickleball is for older tennis players who feel they can’t move as much anymore and there’s a lot of truth to that. But what really happens is a lot of Pickleball people turn into tennis players, at all ages. There’s a point at which they think, ‘This is pretty easy to do, I think I might try tennis.’ The entry level to Pickleball is quite simple: players have fun, and once they realize ‘I can do this,’ they come on over and give tennis a shot.” It also works in reverse as Williams adds, “There are a lot of people I’ve heard say as they face limitations with tennis that they’re turning to pickleball.”

Get in the Game

Tennis or Pickleball, Pro-Am or party, ace or amateur, there’s a place for you. The CTA leadership imparts these invitational words to everyone considering joining the CTA, whether you’re a highly competitive amateur or someone who just looks forward to the lunch afterward:

“You can have fun with tennis on day one, even if you’re not an athlete.” – Hoppe

“Don’t ever forget how much fun you can have and why you got into this game in the first place.” – Williams

And last but not least, Blaskowski encourages, “Just come out and play. We love the game and love seeing people become addicted to the sport.”

The ball’s in your court.