The 3-Year Renovation of Callawassie Courses Has Begun

The name Callawassie is already synonymous with championship golf, celebrated by Golf Digest, TaylorMade, and more as one of the top courses in the state and nation. Not resting on those laurels, Callawassie Island golf’s next evolution is noticeably underway on the island as the legendary Tom Fazio designed courses have started to transform.

Why the need to improve on what’s already a renowned and rewarded? After thirty years, it’s time. Landscape design possibilities have changed, technology improved, the earth settles, and nature runs its course, pun intended. It’s time. In the words of the Golf & Greens committee chair Chris Rape, “A golf course is a living, breathing thing. Every day, things are changing. Dirt moves, grass gets older, things wear out. It’s ready for a refresh.” The process of upgrade means not only repair and renovation but ramping up to new possibilities for the course and community.

“We’re not looking to change the characteristics of the course,” says Rape, “keeping and perfecting all the things people love about it now” and just improving what could make it even better and accessible for great play for more days out of the year as well as, denser grass that will hold up and support playability in compromised conditions. Rape clarifies, “in a season when we get a couple weeks of rain, the ball will set up better on the grass and the course will be dryer than it is now under the heavy downfall conditions.” 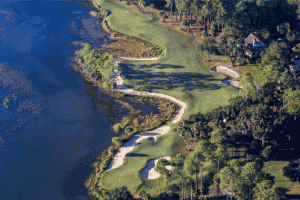 In summary, this means much improved drainage in all the fairways, reworking the bunkers, replacing the cart paths, and re-grassing the entire course. “You want the course to play well even when weather’s not ideal,” Rape specifies. “A lot of courses play well when conditions are perfect; but how do we make sure the course has the same level of playability, look, and feel, whenever there’s bad weather or it’s not growing season. This makes courses more consistent year-round.”

At the time of writing, we’re closing up spring in the Lowcountry with a few dry weeks. The course is great in this prime growing season and in the middle of summer, you wouldn’t tell much of a difference. But there’s a big difference throughout the fall, winter, and traditional wet spring season.

This could lend itself to a number of great excuses for a bad game – not a great day out on the course. But that’s not the Callawassie Island nature. Nor is it the goal and caliber Callawassie Island Director of Agronomy, Billy Bagwell and the Agronomy Team at the helm of the renovation process planned over the next three summers. 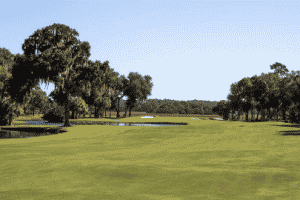 The endeavor that launched in April 2022 has been coordinated to assure 18 holes remain open and playable at all times. Used to having 27 holes, residents are more compressed for a season until completion, but the first reveal is already coming up for this fall, estimated November 1st. The murmur among neighbors is that while there’s an eagerness to get through the challenges of change, there’s an anticipation, “like looking forward to a new car or remodeled house,” says Rape, “great to see the facelift that brings everything to next level and prime condition.”

To map, communicate, celebrate, and connect with intricate details of this process, Bagwell has launched and maintains the Callawassie Island Agronomy blog complete with updates and photos, including aerial shots that lend an exciting perspective of the improvements taking shape.

In the blog’s introduction in April, Bagwell lined up “The key components of the course that will be addressed.” In summary this includes: 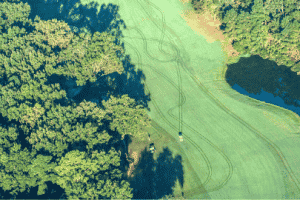 Another celebrated development according to is the Women’s Golf Association President Janet Carpenter is the placement (and addition) of women’s tees and flexible options for players.

While Callawassie Island looks forward to the renovations on its already renowned courses, they are most proud of the fact that the investment into this project have been paid soley by their budgeted reserves. In a climate of financial strain for most communities, Callawassie Island made no assessments for the renovations to their property owners for this project. A strategic plan executed by a board that made sound financial decisions for years has now benefited when needed most.

All told, there will be activity on all three courses over 3 years total with Magnolia and the Practice Facility due to be completed this year, Dogwood next year, and Palmetto the year following. The first reveal is just around the corner this fall with the final completion set for 2024, and again, two nines kept fully accessible for players throughout the entire process.

Already home to distinguished design and 27 renowned rounds, just with areas of settling and shifting through the decades, Callawassie Island’s courses are getting a new green jacket over the next three summers, set for an even grander go at “the greatest game.”