With the Callawassie Sporting Clays Club 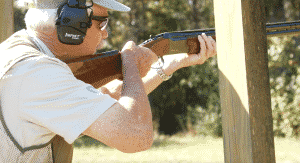 The story goes, the Callawassie Sporting Clays Club was started by accident. While accident isn’t the first word with which this safety-first, classic sport club would want to associate, the fact of the matter is, when it started, the founders weren’t even sure what Sporting Clays were.

Member Tom Dudrick who was known for blue-skying new ideas said, “what about a sporting club?” When a few asked what that was, the answer was, “I don’t know, but I think we could do it for free.” An email was sent to membership and 13 people responded, unofficially forming the original club in 2013led by Dudrick along with Chip Upjohn and Lenny Levine.

Golf with a Shotgun

When it comes to the world of Sporting Clays you’ll hear the term, “Golf with a shotgun.” It’s not just a coat-tails catchphrase, the two have many things in common culturally. For instance, as Rocco Daniele, explains, “every shooting course you go to is going to be different. Different setup, different way of looking at it – Massachusetts, New York, Texas – all the courses are different. That’s one of the things that attracted me to Sporting Clays.”

Daniele grew up shooting sport, “with a rifle and pistol for a while then after college, shooting a little skeet and trap. I became a Sporting Clays Club member when we came out in 2014; it was complimentary to all our southern outside activities like golf. But skeet and trap both have very fixed traditional ways of shooting the course whereas Sporting Clays are very much aligned with the environment. Targets can come left, right, overhead, at you, different speeds, different sizes, low, or high, which really makes it a challenge and keeps you on your toes.”

Not only are conditions set up differently at each course you visit, but stations may also change in your home course unexpectedly. While change makes the sport what it is, there’s also a self-depreciating round of “not fair” catcalls from the crew when Terry Bowditch accounts how you might show up one Monday after playing the Callawassie course for several months and suddenly everything is different.

As much as they change the course, good instructors and experienced shooters might also be able to tell you what to change up in your own personal game to refine your results. With a little chiding from friends, Philip Connell tells the story of moving from shooting left- hand to right-handed. Though it took him a step back to try something new, he remembers it “all of a sudden starting to click.” Turns out the advice was right on target. Not all changes work, but they do advance your knowledge. “I had another gun I bought in Wales; a right-handed gun I was going to sell but thought why sell it? I need a backup. I brought it to the course, and it didn’t shoot it worth a dang. I put it back in the closet,” and that’s the moral of the all-too-common Sporting Clays Club cry, “It’s the gun’s fault.” 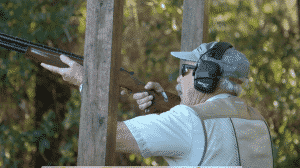 Straight shooting let’s admit we’re not just here for the guns, but also for the guys (and gals) and good times. One of the lesser-event-oriented clubs, this group is still plenty social and leans into the relationships forged on and off the course. (Another “golf with a shotgun” similarity.)

For Bowditch, things literally started on the golf course. “I was golfing with a group, having a beer afterwards, and one of the current members said to another, ‘are you shooting on Monday.’ I asked if they were kidding and they said, ‘we have a Sporting Clays Club, do you want to go along?’ I said I have a shotgun, I’d like to go along – I’d shot in the backyard, cornfield, never been to a club or anything official. I expected to go Monday and never again because I assumed it was all experienced guys, $10,000 shotguns, everyone dressed to the 9s, stuffy. I imagined Thurston Howell III from Gilligan’s Island,” Bowditch says with a laugh. “Much to my surprise it was just the opposite; I was welcomed by everyone, they encouraged me, and instead of going to one event, I go every Monday. We gather about 9:30 every Monday. It takes about 30-45 minutes to get to Turkey Hill Plantation in Ridgeland. Afterwards, we have lunch and have a good time.”

“We’re a very loose group,” says Connell (there’s no Christmas party or annual fundraiser). “We’re tightly knit but as far as rules and regs (aside from gun safety which is ‘A-Number-One’ critical), organization, voting, it’s more like whatever you all want to do we all just figure it out.”

Connell says in one of the club’s best sound bites, “One of my main reasons I’m at Callawassie is because it has access to Sporting Clays. I don’t play golf, but I’ve been shooting a long time and when I moved down here there were two or three main things, one of which was access to Sporting Clays. My wife said, ‘this place Callawassie has Sporting Clays,’ we checked it out; it all worked out; I met Rocco [Daniele] on pub night and he said, ‘we’re doing this, do you want to come join.’ I said I’d love to, and they let me come back every Monday. It’s something I look forward to every week. It’s the one amenity I really care about. It’s a social place and you meet a lot of people I never would have met. Sporting Clays enabled me to meet a lot of people I never would have met. By and large, the guys I shoot with I love; they’re my best buddies,” he says with an air of rib elbowing.

Even if you’re inexperienced, that social bond is just as strong and accessible. Bowditch remembers, “not having a whole lot of background when I got started, one of our members who passed away, Joe Holland, was instrumental in helping me. A number of times it was just he and I, one on one; he worked with me like an instructor. If you’re into it, like anything, I just started to absorb, read, look, listen.”

Bowditch sums up, “You can start with very little, become very accomplished, and have a really good time with good people. Good people like the ones right here.”

With perfect timing came the sentimental-tension-breaker when one of them tagged on, “Plus some better guys that aren’t here.”