Cooking Food with a Sense of Place 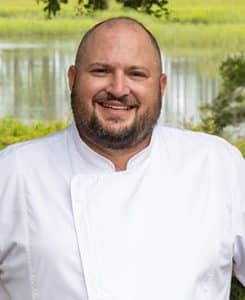 Chef Clayton Rollison isn’t new to the Lowcountry. On the contrary he’s Hilton Head born and raised. In taking the position of Executive Chef at Callawassie Island in 2021, he’s not just familiar with the culture, history, and cuisine, he’s blending a balance of expertise and exposure with long-term local flavor. Nationally recognized and locally celebrated, Rollison’s culinary resume, combined with his local influence, establishes an impressive reputation that he now lends to the high caliber of living at Callawassie.

Locally, Rollison stems from a long familial history of Lowcountry restaurateurs and takes pride in hailing from Hilton Head stock (graduated Hilton Head Prep, father owned a restaurant, uncle was founding member of a major local restaurant group, mother owned HHI’s first women’s clothing store for 42 years). Fast forward to 2013, he returned to the island to open what would become one of the area’s top-rated restaurants, Lucky Rooster Kitchen + Bar, self-described as an American bistro with Southern soul, and credited as influential in establishing HHI’s status as a “foodie paradise.” He sold the restaurant in early 2021 paving the way for his current tenure at Callawassie. But in-between the bookends of his Lowcountry life, Rollison was cooking in some of the nation’s top kitchens with the industry’s most esteemed and awarded chefs.

A graduate of the Culinary Institute of America in Hyde Park, Rollison got his start right out of the CIA gate earning a teaching assistant internship at the school’s Escoffier Restaurant. From there he would quickly go on to refine his learned skills and natural abilities under some of the most well-known names in the industry. While in New York City, just to name a few, he found himself at the Beacon run by Waldy Malouf (the only chef to earn the NYT three-star rating for NYC’s famed Rainbow Room) and Michael Anthony at the historic Gramercy Tavern (named #1 or #2 in Zagat’s Most Popular Restaurants almost yearly over the last 2 decades). With stops in California and Nashville, Rollison further defined his training and talent in highly regarded Nashville kitchens Hermitage Hotel and Merchant.

Almost better than any of the restaurants, resume highlights, or pedigree that make up Rollison’s career so far, is his continuous focus on giving back and working “smarter” and more sustainably. Any conversation with Chef Rollison quickly establishes his passion for community which makes him a fit for the Callawassie perhaps better than any food-related forte.

Not only is he involved with the James Beard Foundation’s Smart Catch Program and a Chef Advocate for Monterey Bay Aquarium’s Seafood Watch, he also participates if not spearheads community response efforts when he comes across a need he (and his team) can meet. Case in point, in 2020 when he had to temporarily shut down his HHI restaurant Lucky Rooster, he and his 12 staff members, along with the staff from FISH Casual Coastal Seafood,  joined forces to provide meals to Horry County schools through Operation BBQ Relief. Starting at 6:45 a.m. each morning while cooking and prepping until about      11:00 p.m. nightly, Rollison and crew provided 7,000 meals per day – breakfast and lunch. With the help of the South Carolina National Guard distributing the meals, they were able to deliver 70,000 meals over the 10 days of working with OBR (an organization that provided nearly 5 million meals to first responders, medical workers, veterans, families, and organizations in 2020).

Not only did they meet the need of the moment, but part of the motivation was, if the county schools had been unable to provide those meals at that time, they ran the risk of losing the funding they needed to go on providing meals in the future. Rollison’s hustle was aimed at “saving” the funding. They were immeasurably successful.

The Ebb and Flow of Coastal Cuisine

With a heart for service, a commitment to shepherding the environment, and a gift for the gourmet, Callawassie has struck a trifecta of foodie gold in Chef Rollison, who’s immediately looking to take advantage of (and advance) the island’s existing resources (land, sea, and surrounding waters).

“One of the things I’m looking to do over the next several years at Callawassie is to work within the parameters of sustainable seafood and regionalize cuisine, incorporating more programming into our gardens and growing even more of our food on-property, implementing as much as possible our Lowcountry indigenous ingredients and techniques and cooking ‘food with a sense of place.’ I want to start working towards cooking with a smaller geographic footprint of where our food comes from while still incorporating global ingredients to achieve variety.” Like the tides that surround, Rollison aptly describes this philosophical approach to food as aligned with the “ebb and flow of the food of our region.”

Asked for a quick taste, pun intended, of what diners can expect at the table, Rollison describes a base of Americana and southern cooking with West African and Caribbean flair. “You should see the beginnings of BALANCE between some lighter-handed food – fresh and vibrant – while not losing focus that we still are a community with desire for a little bit of gluttonous fun,” he says with a smile and a heavy nod toward beloved southern foods.

Rollison also adds astutely, “Please be patient – what we’re trying to accomplish, if done well, will also take time. Some parts will be a long haul, working toward building a well-rounded culinary program with depth, weight, and merit behind it. To be able to do that we are going to have to focus and be vigilant and diligent in why and how we do things. If it can’t be done at a high level and to quality, we don’t want to compromise – we want to build to the ability to provide that – and in the meantime, we’re going to do everything possible to accommodate every need while we’re building a greater ability to do so.”

Come to the Table

Known for a mixture of “heritage and hospitality,” Rollison’s creative philosophy pairs well with the warm-welcome-meets-exclusive-excellence that is the natural sea island of Callawassie. Building on the community’s brand of “balance,” he blends the resourcefulness and organic benefit of locally sourced ingredients (from surrounding-waters seafood to island-grown herbs and greens) with an advanced-palette approach to both traditional dishes and innovative culinary arts.

He began here, he knows these waters, he traversed to gather the finest epicurean expertise, and now he’s bringing this bounty together, laying it all out neatly on the proverbial table arranged like a perfect setting at a 6-course meal. Landing at home on Callawassie, Chef Rollison invites you to grow, cultivate, connect, innovate, and most of all, enjoy breaking all manner of bread together in fine dining on this abundant island.