“Rumor Has It” We’re Good Together As this month began, a theatre event that was written, produced, directed, and performed entirely by Callawassie Island residents. The production “Rumor Has It” netted nearly $14,000 to support community programs, which is a hefty charitable donation based on the $500 production budget. However, it is the enthusiasm of our Island’s residents who attended this performance that make all the difference.

“Rumor Has It” was written and directed by Elaine Diaz, backed by co-director Dianne Rogers and production manager Betty Fitzgibbons, with Mike Anderson running sound and lights. The cast included 22 actors and a three-piece stage band, all Callawassie Island residents.

Popular? It sold out the evening performances with two weeks to go before curtain.

Friends of Callawassie Island (FOCI), Callawassie’s on-island, nonprofit, puts on a show like this every other year, and it is only one of the colorful ways FOCI raises money for neighboring not-for-profit organizations. Other fundraisers include a successful, annual golf tournament, a charity yard sale, and a homes tour. 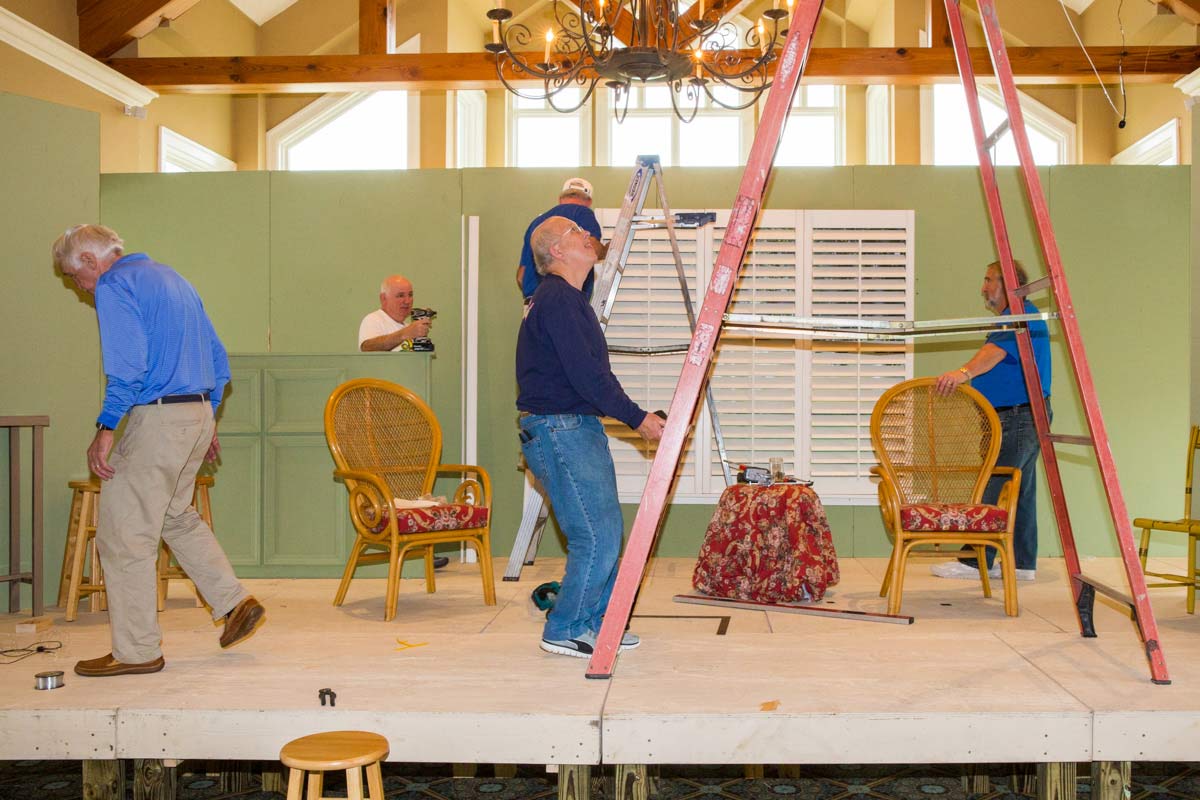 How does a production of this size and complexity become feasible, much less successful? Well, experience is one answer. Elaine worked out the kinks 35 years ago when she saw an opportunity to put her passion for theatre to work, serving on the PTA in Annandale, Virginia. By writing plays of her own, Elaine involved parents, teachers, and students alike in the fundraising effort and surprised them with fun while doing it. Those “home-made” productions raised $35-40,000, so the results were far beyond what was expected.

Elaine’s ability to get results like this from theatre involves forging teams whose members are far more than disorganized dreamers. That ability seems to start with the clarity of her vision translated into words on a page. Yes, writing the shows is Elaine’s favorite part of the process – although you’d never know that if she did not tell you.  She remains lit up with enthusiasm during the challenging road of rehearsals, costumes, and set-building, which are known to be the more difficult tasks of theatre. Everybody Wants to Get into the Act

Callawassie Island residents are more than willing to take part. People with more than enough to do, on one of the most beautiful places on earth to do it, flock to the stage to take part in making the Callawassie Players’ productions a success. In fact, this year the cast was consciously limited to 22 actors, just for practicality purposes. As you can imagine, even more folks than that stepped forward, willing, able and eager to participate.

“People who usually gather in different ‘crowds,’ – the golfers, the tennis buffs, the boaters – they all seem to get together on this,” Elaine said as rehearsals for “Rumor Has It” entered their final week before opening. Theatre fans are just barely the beginning of who’s likely to take part. “And unexpected cast members bring in an unexpected audience,” Elaine said.

Photos of past productions testify that the Islanders who take part hold nothing back. And the happiness we see throughout the crowd is the evidence. What these actors put in is amply rewarded. 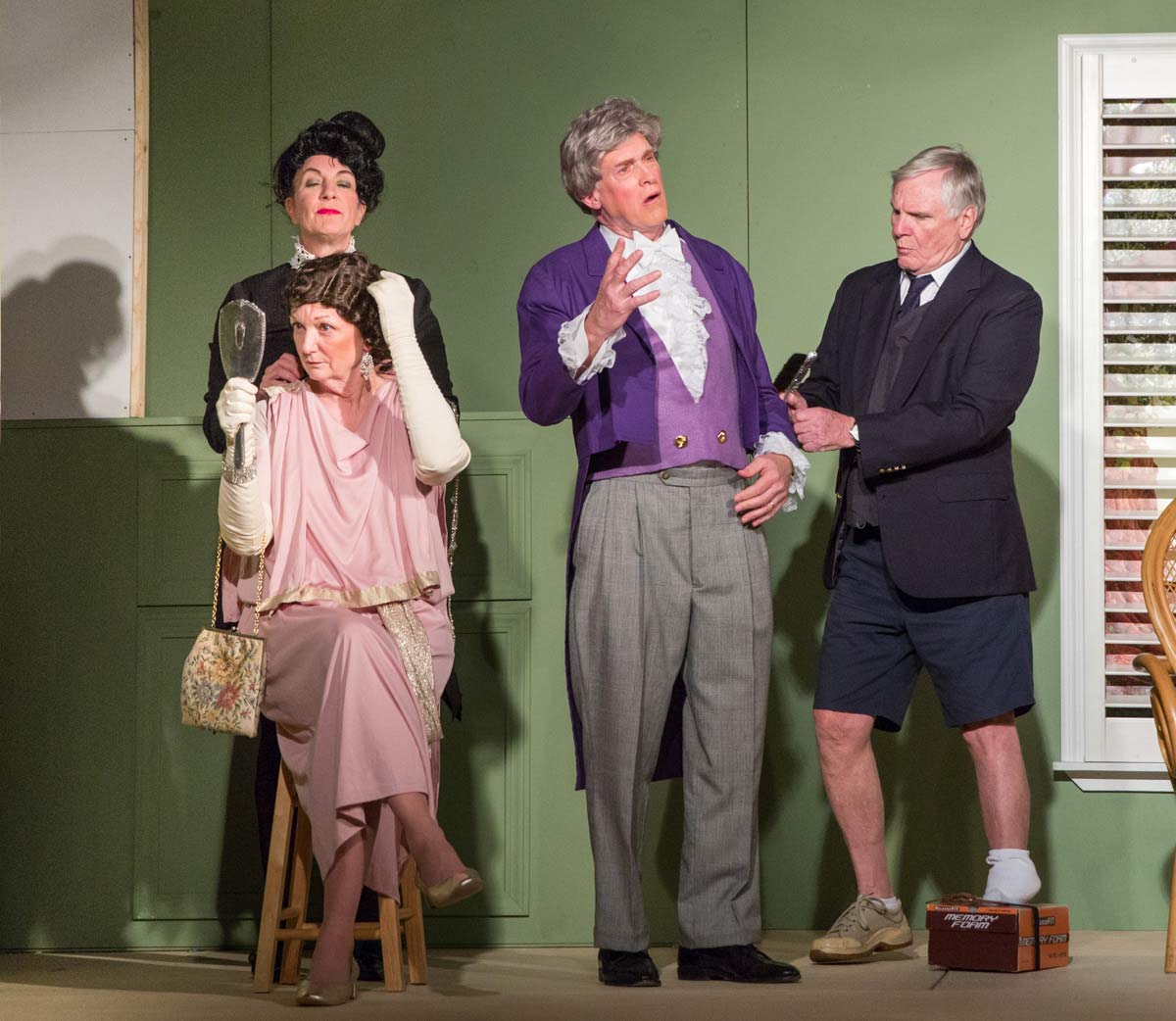 The Triumph of Previous Productions

The success of past years’ FOCI shows is a big reason why people are so willing to take part. The first FOCI theatre production was in 2012. “Myth Behaving,” followed the exploits of those unruly characters in Greek mythology. Although the stories of Zeus and the women he loved can be, ahem, “earthy”, all the FOCI shows are “G-rated,” because multi-generational enjoyment is a priority on Callawassie Island.

Since then, “The Sopraltos – It’s All About Family” used the famous TV series, The Sopranos, as a platform for weaving a Callawassie Island story that could be intriguing, funny, imaginative and still ring true. The physical resemblance of our Callawassie Islander residents to those storied gangsters from TV was positively uncanny, thanks in part to professional costume and makeup design, collected and created right here from the closets of our many residents.

“And Then There Were – – Not So Many” was the 2016 production, borrowing the structure of a dozen or more Agatha Christie mysteries. The Callawassie Players fell to foul play one by one as the mysterious murderer escaped all but the most brilliant – and climactic – detective work.

The Power Behind the Stage 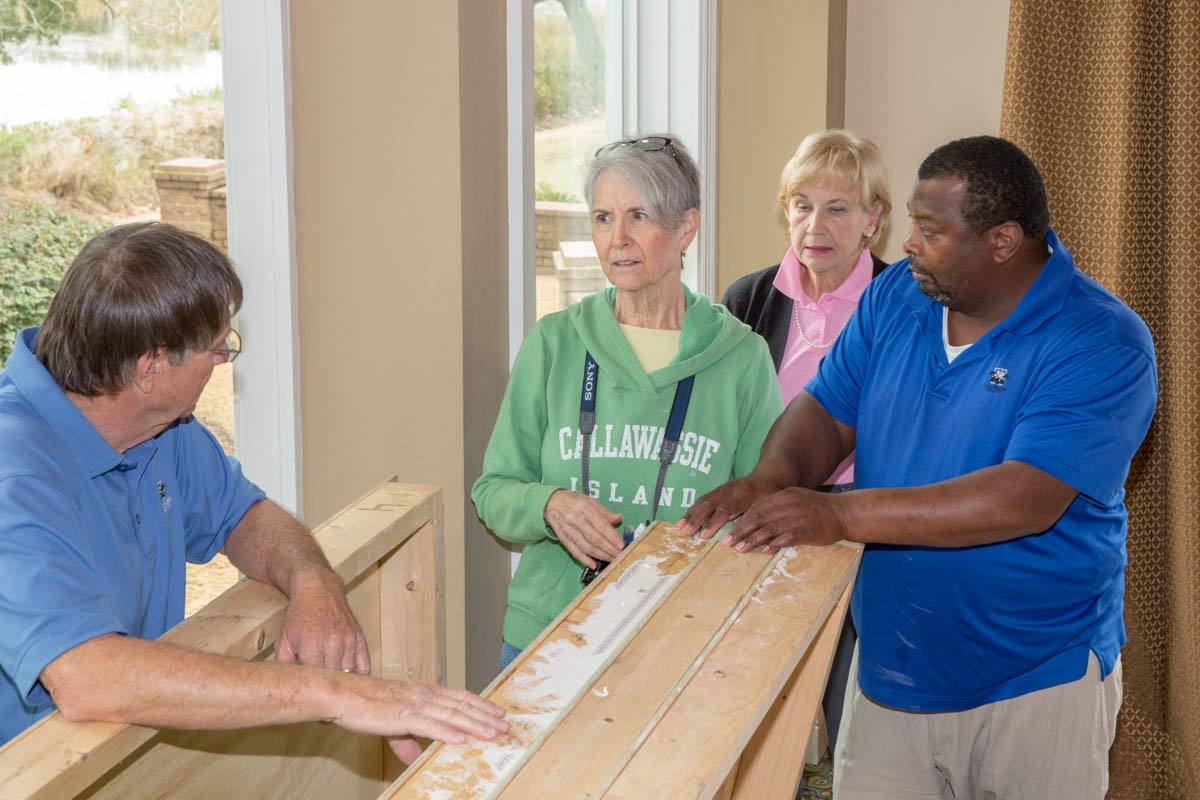 “FOCI has always remained true to its mission,” president Bitt Dennis said. Enriching the lives of people living in Beaufort and Jasper Counties, by supporting community programs in neighboring town, has become the core of the FOCI mission. A disciplined grant application process identifies worthy, not-for-profit organizations that serve the needs of disadvantaged or underserved individuals and families.

Since its inception in 2001, Friends of Callawassie Island has raised and awarded over $600,000 in grants to help those in need. As a qualified 501c3, governed by a board of twelve Callawassie Island volunteers, FOCI has achieved uncommon efficiency and effectiveness, devoting less than 1% of funds to administrative costs.

Moreover, the connections within Callawassie Island that focus on charitable outreach, result in a genuine connection between one of the leading private communities in South Carolina, and the communities that neighbor this island paradise.

Connection in All Shapes and Sizes

Connection on Callawassie Island plays an important role in making this one of the best places to live in South Carolina. The first connection is pretty obvious. Our lovely causeway that leads across the tidal waters to Beaufort County is where many Callawassie Island residents felt drawn to our island. The sight can be that compelling. And the causeway is just the beginning of all that the island has to offer.

The philanthropy of Callawassie islanders is one of the themes that brings us together, because our interests are pure and its more about what we do for our neighbors than just about what we give. Friends of Callawassie Island is an organization where a lot of residents discover a channel for their charitable interests. And a lot of fun is discovered along the way too.